Deployment failed, Java app to be deployed in Dockerfile

Priority: Medium
Request: The deployment of the app seem to be failing as per the activity log in CB dash. However, the logs are not accessible from the CB dashboard. Probably is due to this PR to deploy OptaPlanner (Java app) on a Dockerfile: https://github.com/crowdbotics-apps/myhelpa-15611/pull/468. See related ticket : Environment for Java Application to integrate with our app

Environment for Java Application to integrate with our app "How do I ... ?"

Ok, many thanks @dmitrii.k, we will try that. If @amador.jesus can anticipate any inconveniences we will let you know to find any workaround.

@jorge.m, thanks for writing in!

It looks like both your staging and production back end builds are successful. This is confirmed by the CB Dashboard, as well as Heroku build log.

Your app builds have failed, but that is unrelated to the introduction of OptaPlanner into the back-end.

Efectively the backend seem to be deployed successfully. However, OptaPlanner have been ignored. It might need some manual work on your end to get deployed @dmitrii.k on DockerCompose

@jorge.m, IRC, OptaPlanner is meant to be called from a command line, and is not a web-based API.

Please clarify whether you created a Java-based web API with OptaPlanner or committed command-line scripts meant to be called using command line API?

@amador.jesus kindly share your approach here so we can move forward or find a workaround

For the moment I have a spring boot configuration with an API Restful, this server needs db connection to read and write data, also it works with some envs
DATABASE_HOST=<postgres_host>
DATABASE_USER=<postgres_user>
DATABASE_NAME=postgres
DATABASE_PASSWORD=<postgres_pwd>

Using a command-line approach would probably be easier, but Spring works, too.

However, there are points that need to be taken into consideration:

@jorge.m, it sounds like we’ll need to run another dyno for this project, which will cause an additional cost.

An alternative and perhaps a cleaner solution, is to create a separate web app on our platform and run it independently from the main app. This way you’ll have complete control over the Spring boot deployment, access to logs, etc. Using this approach, you should be able to still have a single docker-compose.spring.yml (as a naming example) file for local development, provided you have both projects cloned to your computer and use relative paths.

it sounds like we’ll need to run another dyno for this project, which will cause an additional cost.

An alternative and perhaps a cleaner solution, is to create a separate web app on our platform and run it independently from the main app. This way you’ll have complete control over the Spring boot deployment, access to logs, etc. Using this approach, you should be able to still have a single docker-compose.spring.yml (as a naming example) file for local development, provided you have both projects cloned to your computer and use relative paths.

Thanks for the suggestion @dmitrii.k. An important decision factor would be to know the extra cost for the client having another dyno VS having another app. Can you provide that info?

@jorge.m, you are most welcome.

Infrastructure-wise, the resources required will be the same - another DB instance and another dyno (except in case of an app it also requires another repo). The rest you should probably discuss with either @whitney3 or @anand.

One important thing to consider besides the point above is security: since you are running a web-based API on a public URL you should probably think about securing and limiting access to it.

Thanks to clarify @dmitrii.k. I will let @anand and @whitney3 assess here on how to proceed client-wise.

In the meantime, let me provide some more context if that helps to come up with the most suitable infrastructure:

Extra apps are priced at $199/mo and up, although the advanced and enterprise tiers pay a reduced rate on multiple apps. We define new apps as new repos.

New dynos on an existing app are much more cost-effective, so we recommend this approach when customers scale up. They are added onto a user’s monthly plan cost for actual compute minutes used as a pass-through expense. Optimization engines are generally compute-intensive, so it’s wise to get a sense of the costs here with a few trial runs.

@anand A new dyno sound like the best solution. And It would make a lot of sense to do a few trial runs. However, we would need a few dev iterations to add all the constraints that will affect to the optimization engine. Only by then we could have an idea of the costs. Ideally, if there are extra costs, the client should be informed as soon as possible to avoid surprises. Can we estimate a cost range based on the first point provided on my previous message?

I made a jar file to run as a command line in the main process, but I’m gettin an error memory when I try to run that jar 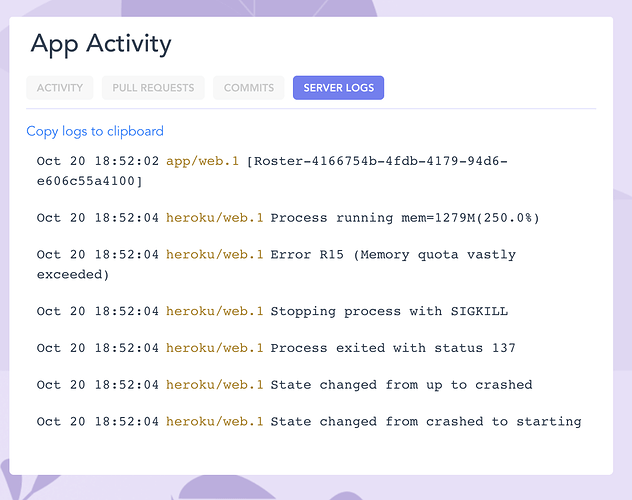 @amador.jesus, thanks for trying that out. This sort of memory requirement would need a dyno that costs up to $250 a month.

It would probably be more cost-effective to run it as a scheduled task, and not as part of a web process. Then you can run this sort of hardware only as long as the process is running, and not for the whole month.

@dmitrii.k is there a way we can run it as a scheduled task that let us run it on demand? Because we would need to allow an admin to run it from the web admin.

@jorge.m, no, scheduled is by definition recurring, not invoked.

It sounds like putting this Java code somewhere on GCP CloudRun or AWS Lambda makes more sense from performance and cost perspectives, since that would allow to trigger it any time and incur costs only when running.

That sounds like the right choice @dmitrii.k. How can we proceed?

optaplanner needs to connect to actual database, so if we are thinking about to use AWS Lambda, We will need those permissions, do we need API gateway right?

From the architectural standpoint, it would be much better to set up two independent databases (one being a data lake) and pipe the data into the database that the OptaPlanner is using. Or if you have to share a database, it would probably be better to migrate to GCP SQL or one of AWS DB products to be able to manage the users ourselves - Heroku provides us connection URLs but they may change, which would require manual update on the side of OptaPlanner.

Yes, to run on Lambda or GCP Cloud Run this would have to be an API, or it could be invoked using a messaging service.